A forum for DIY, cars, pets and all things related to home life
4 posts • Page 1 of 1

Hope you're well throughout these weird times.

I have built a wood fired oven last year. We enjoy cooking all kinds of food (not only pizza) with it. Making fire is rudimentary and basic enjoyment for humans I think.

We live in a very small trailer house (wife, daughter, myself). I need some more space for my daughter. So I designed a small hut to enclose the oven, it will be a mix between Japan and western style timber framing. I already bought the timber (mostly sugi), which is now covered and waiting for me to get ready to lay out and cut. I want it to be a mini workshop for myself and tool storage. I attached a Sketchup of the design, but in reality it should be covered with walls, floors, roofs and windows to keep weather and critters at bay.

My father in law who is normally laid back made a potential disruptive point last night. He said whether it would be a good idea to get the local fire marshal to look over the plans and comment on its fire-safety, whether is conforms etc. Now, my oven is massively insulated (20-25cm around the firebricks, 15cm perlcrete (perlite mixed with cement) between oven floor and concrete base, steel door, double walled chimney). It never even gets hot to the touch despite being 500 degrees inside. The oven is at least 7m from the nearest building, and has lots of open space around it. Personally I am not too worried about safety concerns at all, but that's a layman's opinion and not worth much if regulations are strict. I am not sure it's a problem or not to enclose it in a building, and I don't know the fire marshal personally to know what he might say.

And the sticking point might be that this has all been DIY. I've proceeded without getting planning permission-and have just winged it while building this more and more over the last year and half. I know the common size limit for needing building certificate or permission is 10m2 size. My plan is 10,8m2 to cover the oven and allow space for a small room beside it so I am slightly above limit - how much of a problem is that? Another thing is that you are not supposed to actually have a solid foundation, but build on blocks to avoid having to get permission (and pay tax etc.). Well, tbh I have concrete piers and a foundation under the oven, so I might already on the wrong side of regulations there - and I also had to make a retaining wall because this is all on a slope. However the wall is less than 80cm tall and doesn't require permission due to it being that small.

Where we live it is semi inaka (outside Yokosuka, Kanagawa) and this is in the backyard adjacent to the hill and forest. I know that the land is not coded for any specific use. We don't have any neighbours, so I am not worried about anyone telling on us or feeling bothered by this. But on the other hand I am thinking whether I ought to get it inspected and get paperwork in order for something small like this? I am just worried that doing it at this late stage could make problems. What is your general experience and opinion?

Thanks in advance, Simon

Pictures attached to illustrate the oven and plan. 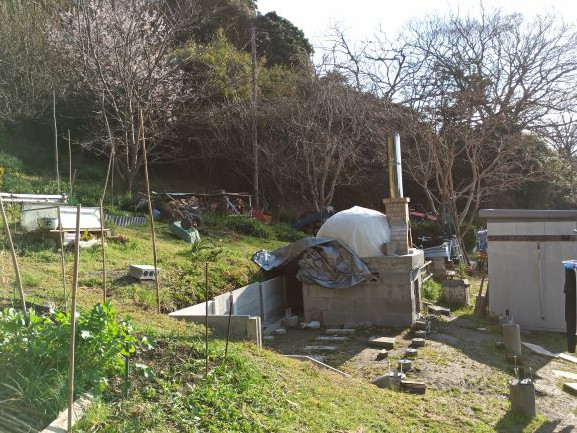 Nice outdoor oven, I'd love to have something like that for pizza and bread making.

It's a tough one to answer and a lot would depend on your individual municipality, some can be quite relaxed and other really uptight. If it's just a shed for storing tools and stuff then they probably won't be too bothered but if it's classed as living space for someone then things might get a little more complex. You may have to take earthquake proofing into consideration and fire safety sounds like it could also be an issue.

Perhaps @Tora might know something as he has mentioned working with some sort of furnace or kiln that may be relevant or possibly @Eric in Japan could have some relevant knowledge. Also just to keep the peace with your inlaws it may just be easier to get a fire marshall to give it a check, if your oven is totally safe shouldn't be a problem.

Although you done some prep work if you haven't already built any structure then you may be ok contacting the local council but a lot would depend on your local city office. They may be totally cool with it or not.
Top

Fire marshal?! What’s a building permit?!! I’d be more worried about the in-laws!!!

A lot will depend on your location and land designation. Inquiring at the local town office or fire marshal with “I’m thinking about doing this and this...” tell them your building or better yet RELOCATING a shed for farm/garden tools. If it’s sitting on pier blocks that can be removed easily, it might be ok. If you know someone in the trades, they might be more knowledgeable or be able to point you to the proper department and tell you how to approach/word it so things are much less hassle than they COULD be.

I’d make sure the area around where the chimney goes through the roof is well thought out keep wood and other flammables as far away from heat sources as you can. Pyrolysis is very real. I’ve seen a fire from it. That being said, it WAS a flue from a glass furnace (1000 degrees C) passing through a wall only a couple cm from and old cedar post- POOR PLANNING! Your oven won’t be on all the time I think and the temps are different. Common sense and a lot of questions/ research will save you headaches later and impress the fire marshal or other authorities if they need to be involved.

Good luck, be careful and try to enjoy the process. I plan to make an earth oven if I ever get some of my other projects under control. been saying that for a while now though....
Top

Thanks very much guys for your opinions. Much appreciated really! My in-laws are fine and especially my father in law likes all the DIY shenanigans we get up to - as long as I do pizzas for them regularly they're happy.

Actually pizza while not difficult to do is a pretty intense ordeal, pizza has to be ready when temps are right and things in and out of the oven within a few minutes. I like doing it but it is always a bit intense especially if I have to make 4-5 pizzas in a row. Then it is much easier to have a couple of dutch ovens and do bread, sweet potatoes, or slow cook stew with residue heat, or even bbq inside the oven is also easy and safe. We do something like that almost every week if the weather permits. But I am off on a tangent here...

Good advice to say this is just a tool shed, and not really a space where people will spend time, even in reality I want to make this a small man-cave/workshop so will need electricity laid also. And yes, will make sure to design properly the through-the-roof bit of the chimney and then ask the fire dept. for advice. After thinkin on this some more, we also know a local surf dude who's an architect. I am planning to ask his opinion, i.e. how strict this is and what I might do to get this out of the grey and into the green. He's been here before and knows about the oven already.

Lastly, yes if I had just built it on cinderblocks or smth. it would have been no big deal at all, probably even going a few percent above the size limit. But I had to pour footers because we are on a slope. Anyways I will collect more information and talk to people before I start setting the structure.