A forum for all things cooking, food or snack related
38 posts

about the cheese war.. lol
sets up a little booth with UN stickers on it....
*disclaimer... this is my opinion and I am opinionated. TL;DR

Most good cheeses available in most other countries across the sea from US .. are actually banned in the US.
Hence.. a lot of ppl in the US have limited experience of the vaste plethora of cheeses that a good proportion of other ppl in the world eat. (and i am talking about cheese, cheese not the other stuff i mention below *)

In the UK and Europe, cheese is a foodgroup of its own, almost a religion with some people.
If you go to some restaurants, you finish up your meal with a cheese board, where you can pick out different cheeses and eat them as is. Sort of like a prayer at the end of the day lol.

In France of course its a religious statement and accordingly the best in the world. lol.
In some places, their own cheese is actually illegal in their own country, but people still eat it on the QT. (think casu martzu in Sicily)

So when someone says to a Brit complaining about good cheese in Japan, try the Colby Jack... it is sort of on par with a Protestant telling a Hindi to try praying to The One God for a change. haha.

There is nothing wrong with US cheese IMHO. But personally i find it a little bland compared to what is out there in UK and Europe etc.

But I think for a good majority of Americans, cheese is that yellow stuff that goes on pizza and mac n cheez... (not that there is anything wrong with that and I apologise if my generalisation of the US population offends you.)
*then theres that sliced shit that goes on burgers
*and the weird shit in a spray can
*and the stuff in a jar.......

However.. I do agree with most of what you say about cooking with cheese (depending on the dish of course)
One can even make a decent something something using some of the Japanese grated in a bag cheeses if you are creative enough with your other seasonings. As for 'unhealthy' cheese... makes me laugh as healthy and cheese are not really 2 words that go together.

Over the years, more and more cheeses are available in Japan. I have been here since Granny fell off the bus and when I first arrived, the only cheese available was that 6 triangles in a round cardboard container. There was not even sliced cheese. I kid you not.
You could, if you were really, really rich, buy a sliver of camembert or cheddar from the Sogo, Daimaru or Mitsukoshi food court area. Not a whole one, mind you, but just a slice and a thin one at that.

Nowadays when people complain about the limited range of cheeses in Japan, I roll my eyes and try to refrain from 'when I was young we walked 20 miles through the snow, uphill, both ways' kind of comments haha.
Japan probably has more imported cheese varieties available than the US does. So I shall not complain.

You will find the cheese debate pretty similar to the Mac vs Windows debate. You cannot win. There is no one simple answer.
And to be honest, if you like the cheese.... well fuck everybody else.
Its your mouth.. your tummy and if its something you are cooking for someone else, and they complain. Well they are rude to comment. They should at least wait until they get home.
Top

I agree with gonbechan. When I talked about artificial taste, what I really mean is the homogenised, uniform texture of some American cheeses. My complaints are probably largely centred around texture rather than flavour, and the orange doesn’t bother me even tho it’s bizarre. I’ve eaten good cheeses in the US too, I just think the sort of basic “cheese” of the US is a bit lacking. I think it’s all about what you grew up with anyway.
Top

I'll add my 2 pence worth. That BBC article sums the situation up pretty well, due to transport and tariff costs you just don't see American artisanal cheeses in Europe so most Europeans have no idea what is available, myself included as I've never been to the states.

Going to Costco (whether in Japan or elsewhere) and expecting to buy high quality products is always going to lead to disappointment, it's cheap. Some of the stuff is fine or perfectly serviceable but there's a lot mass produced fluff.

Luckily here in Chiba there is a thriving artisanal cheese industry developing down in Minami Boso, it's mostly soft cheeses but pretty good. There's a pdf map showing some of the makers here but that doesn't include everyone. Chiyo of Fromage Sen produces some absolutely heavenly soft cheeses, all handmade in small batches.
Top

I think we're pretty much in agreement with the state of things.

No doubt the impression is the average American is pretty clueless about cheese and it's not without merit. I would argue that things are improving and it really depends on where the person is from and their social economic status. Cheese culture might be ubiquitous in the UK but in the US, it's really really segmented. Clearly there are plenty of good 'merican takes on cheese in the US and many outside (and inside) the US are unaware. We also agree, it depends on usage. My colby jack suggestion wasn't for use in a cheese platter but generally in cooking where you generally want it to melt and add flavor but not overpower the dish with sharpness. Something like colby jack on a cracker is a staple snack for kids in the states and it's fine. Simple and cheap are the goals there, if that isn't appreciated by some, it's their loss. I would agree many Americans never "level up" from this but there are plenty that do and can still appreciate the simple American cheeses depending on how they're used. I grew up with that stuff but as an adult, I prefer a proper charcuterie Board with cheddar, brie, smoked gouda, camembert, etc. I'm often using mascarpone and goat cheese in cooking. I pretty much can appreciate anything but I like natto though so maybe I'm not the best connoisseur?

FTR, you guys have all been great, and reasonable here. I only really take issue with being dressed down (or are we saying cancelled now?) for using American cheese in cooking and the tsunami of assumptions that seem to come with that. Even within the US, those grocery store (look like they're printed on plastic) slices and "cheese products" aren't held up as anything other than processed junk food so it's dishonest to be attacked as if I'm trying to compare a Pinto to a Bentley.
Top

We have plenty of mediocre cheese in the UK and a lot of people seem happy with that never venturing far from all sorts of mild cheddars that have never actually been Cheddared in their lives but churned out of featureless factory lines.

with some of Mrs Nouka's homemade gherkin pickles

Zasso Nouka wrote: ↑
Sat Jul 03, 2021 8:09 am
I must say those plastic wrapped orange cheese slices are a guilty pleasure on top of a burger

with some of Mrs Nouka's homemade gherkin pickles

On that note, I picked this up at Costco yesterday.... 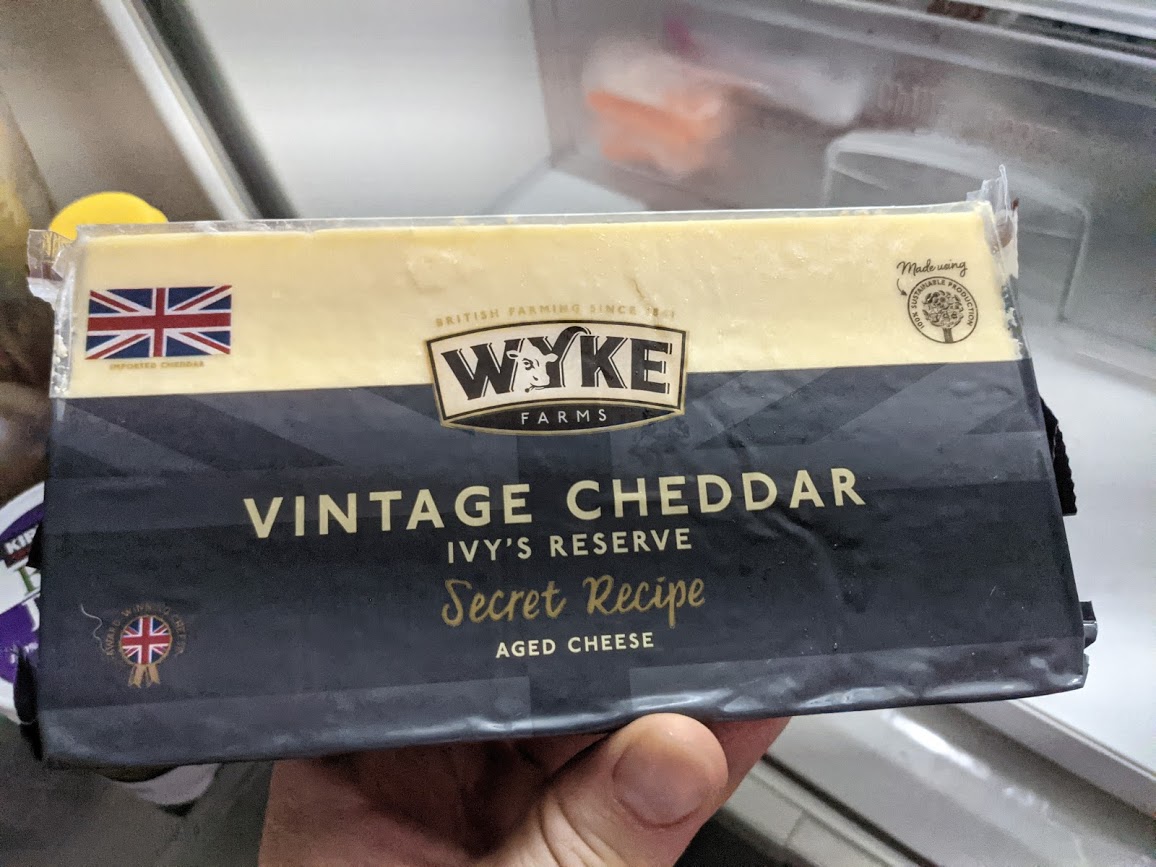 I quite like that one, it's not an artisanal cheese by any stretch of the imagination but for a mass manufactured cheese it's pretty good


Otona Cream Pie wrote: ↑
Wed Jul 07, 2021 12:21 pm
It's not inedible plastic as much as it looks like it but there are also high end versions that legally qualify as cheese and I'm sure you'd like more

Get yourself a cheese slicer, whether it be one of those shaver types or a wire type. Easy to make your own proper sliced cheese for burgers and sarnies.
Top

I tried some of the proper farmhouse cheddar with our cheese slicer on a homemade veggy burger and it just didn't cut the mustard, which cheese would you recommend to be somewhat similar to that orange plastic cheese ?
Top

we do half and half mature cheddar layered with gouda... plus you need more than you would with the orange plastic slices, so pile it on.
Top
38 posts